Last Monday evening, ÉTS awarded the Université du Québec (UQ) network’s 50th Anniversary Medal to 10 prominent individuals who have left their mark on ÉTS over the years through their actions and their commitment. The Medals were presented to the honourees themselves or to members of their families during a very special evening that was held in the new Salon des diplômés Vidéotron at the Maison des étudiants.

The ceremony was attended by approximately 50 invited guests, including members of the families of the honourees, ÉTS professors and employees, members of the Board of Directors, Pierre Dumouchel, Director General of ÉTS, and Johanne Jean, President of UQ.

According to Pierre Dumouchel, “ÉTS engineers are everywhere now. Some have become senior managers of large corporations or work in SMEs, while others are plying their trade in companies in California or overseas! There is no doubt that some of the credit for these success stories belongs to our builders, who had the audacity to propose a new vision for an engineering school at the beginning, focusing on training engineers who are committed to meeting the needs of Québec-based companies. It was a bold and unprecedented move.” 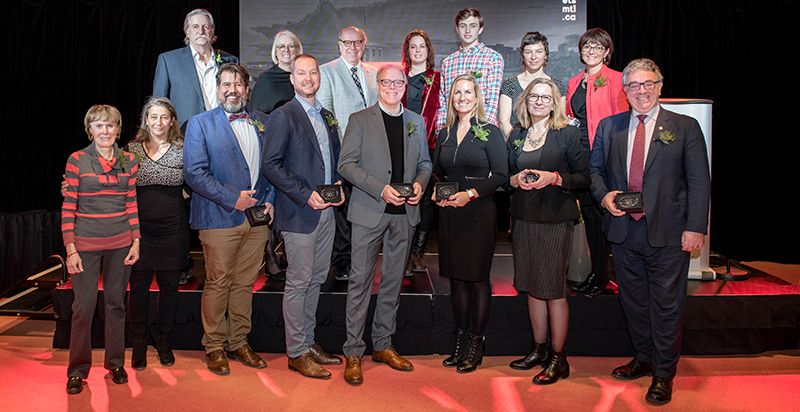 Johanne Jean, President of UQ, and Pierre Dumouchel, Director General of ÉTS, surrounded be honourees and members of their family

Medals were awarded in three categories:

Gérard Letendre
In awarding its first ever Honorary Doctorate in 1981, ÉTS acknowledged the outstanding contribution made to Québec society by Gérard Letendre, both for his services in the education and consulting engineering sectors and his involvement in socio-economic issues.

Robert Nelson
When Robert Nelson joined ÉTS as Director of Administration in 1987, the school was facing a number of challenges. He jumped right in and began his work, which lasted 20 years and resulted in ÉTS having access to invaluable resources to support its extraordinary growth.

Robert Papineau
ÉTS experienced unparalleled growth under his watch, both in terms of registrations and the programs it offered. He laid the groundwork for a true university campus and transformed ÉTS for good. He also made outstanding contributions to the Canadian and Québec committees of deans of engineering, the Canadian Engineering Accreditation Board and numerous government advisory committees.

Jacques de Guise
Jacques de Guise has been a Professor in the Systems Engineering Department since 1990. He is a born communicator with an unmatched ability to make complex information accessible to everyone. An innovative researcher whose enthusiasm has not waned since the creation of his laboratory, Professor de Guise has shared his knowledge with dozens of graduate, post-graduate and post-doctoral students over the years.

Luc Favreau
Luc Favreau has been a mainstay at ÉTS for close to 30 years. He was one of the first lecturers and educators in the General Education Department, which he headed from 2004 to 2014. Among the highlights of his logical yet creative management career is the technological academic path, of which he was the master craftsman.

François Gagnon
Professor Gagnon joined the ÉTS Electrical Engineering Department in 1991, and has been conveying his passion for wireless communication to multiple generations of students ever since. During his career, this prolific researcher has worked in close partnership with Ultra Electronics TCS for 21 of his 26 years as an educator. His first major success was in 1998, when the US Army adopted the HCLOS long-distance radio that he designed.

Sophie Lerouge
Sophie Lerouge is a Professor in the Mechanical Engineering Department, and has held the Canada Research Chair in Biomaterial and Endovascular Implants since 2008. She always dreamed of applying a knowledge of engineering to medicine in order to improve the health of the population. Her current focus in on injectable biomaterials intended for cell therapy and tissue engineering, which involves injecting patients with cells whose actions lead to the repair of tissues or the fighting of diseases.

Charles Deguire
Co-Founder and CEO of Kinova, earned his Bachelor degree from ÉTS in 2007, in Electrical Engineering with a Healthcare Technologies profile. ÉTS is delighted to count an entrepreneur and ambassador of his calibre among its graduates. His career path has led to significant advances that have improved the lives of mobility reduced individuals more than any other technology.

Réal Laporte
After graduating from CÉGEP in Civil Engineering, Réal Laporte earned his degree in Civil Construction from ÉTS in 1984. A few years later, he undertook what was then called “integration bridge” studies at ÉTS, which allowed graduates to be accepted into the Ordre des ingénieurs du Québec. He is now President of Hydro-Québec Innovation, équipement et services partagés and CEO of Société d’énergie de la Baie James.

Karine Leblanc
Karine Leblanc earned her Bachelor degree in Mechanical Engineering from ÉTS in 2005, and subsequently moved to California, where she has been working as a HVAC Sales Engineer for US Air Conditioning Distributors since 2002. ÉTS is very proud of the international scope of the activities of one of its graduates.

The Université du Québec network created this honorary Medal as part of the 50th Anniversary celebrations for UQ, with a view to highlighting the outstanding achievements of prominent individuals from its 10 constituent institutions.

UQ and ÉTS are proud to have awarded the Université du Québec 50th Anniversary Medal to these 10 recipients.